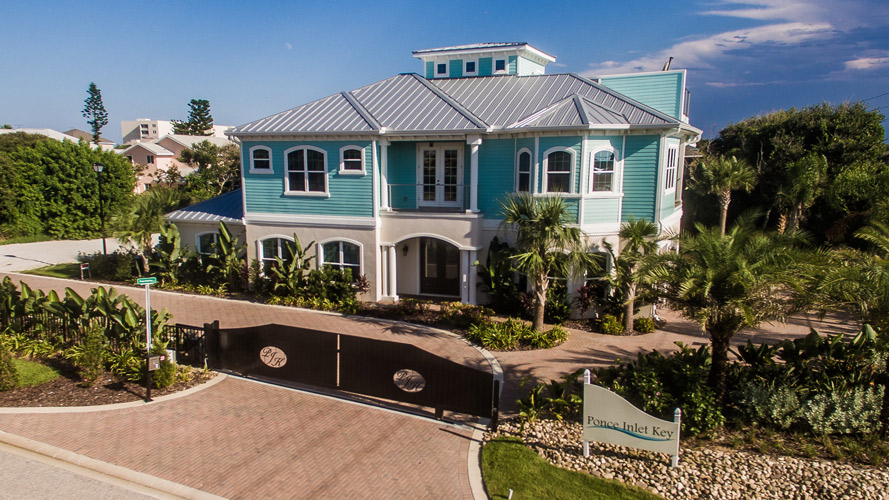 By NewberryDecember 27, 2018News
No Comments

As neighborhoods go, Ponce Inlet Key is to say the least, unique.

The “boutique” neighborhood of five home sites was started by Chad Newberry and his dad, Michael Newberry of Newberry Homes. Located in north Ponce Inlet, Chad and Michael secured a strip of land that stretched from the Atlantic Ocean to the Intracoastal Waterway.

“The land had sat idle for years,” Chad said. “It was raw land, we had to put in the water, the sewer, build the streets.”

After securing financing, Chad, with his dad as the general contractor, started to build the first home.

“People thought we were crazy, building “McMansions,” building large, million-dollar homes next to townhomes that are going from the $200,000s and $300,000,” Chad said. “But we thought there would be a market for this, we thought they would sell, and we were right.”

The community has access to the ocean by pedestrian walkway at one end of the subdivision, and boating access to the Intracoastal Waterway at the other end. Boat slips for each home are currently in the permitting phase, Chad said.

“It’s the best of both worlds, it really lends itself to the beach lifestyle, and also to the boating lifestyle,” he added.

Chad Newberry said they have already sold two of the five homes: The Hemingway model, sold for $1.2 million; and The Mallory, currently under construction, sold for $1.7 million.

“The Hemingway was the Parade of Homes 2017 Grand Award Winner,” Chad said.

Two lots are still available, listed at $225,000 for the lots; Newberry Homes is the exclusive developer, builder and Realtor.

READ THE FULL ARTICLE AT THE DAYTONA BEACH NEWS-JOURNAL

Fill out the form below to learn more!

Please enter your email address to get the latest news, project updates, and event information for Newberry Homes!